When celebrities such as Oprah Winfrey, Lady Gaga, and Lena Dunham throw birthday parties these days, of course they go for the hottest club in town: the health club. All three chose to celebrate by inviting their friends to a class at SoulCycle, which hosts so many birthday rides—for famous and nonfamous alike—that it has its own party policies in place (a cupcake and singing for the birthday guest). “We have a ton of riders who celebrate at SoulCycle,” says Gabby Etrog Cohen, a spokes­woman for the indoor-cycling studios. “I booked two birthday parties just today.” This isn’t simply some crazy fad among the exercise obsessed in New York City and Los Angeles. Working out has moved from pregame side dish to main social event in cities across the United States. Consider the evidence. 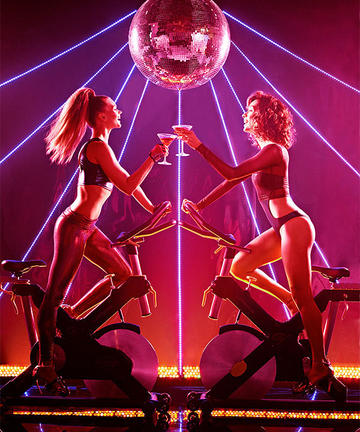 Nightclub Cardio, founded by Houston’s Jennifer Brugh—who wished she could count clubbing as exercise but couldn’t get sweaty enough in her heels and cute clothes—now has certified more than 350 instructors nationwide to lead classes, sometimes in actual nightclubs, complete with disco balls and Vitaminwater mocktails. Regulars have another name for it: “healthy hour.” “We don’t go to clubs anymore,” says devotee Amy Jankowski, 46, of Houston, “but this lets us do booty poppin’ without the alcohol and get in a great workout.”

Maggie Johnson, 26, a publicist in Chicago, says she and her girlfriends routinely get together and take a barre class instead of hitting the bar. “It’s a chance to see your friends, and our workout date makes it more motivating to go to the class; it’s much harder to skip it if you’re meeting your girlfriends there,” says Johnson, who’s training for her twelfth marathon.

Studios like Cyc Fitness (which has locations in New York City, Atlanta, Austin, and Madison, Wisconsin) and 305 Fitness (a dance cardio studio in New York City and Washington, DC) are further blurring the line between going out and working out. Classes at 305 Fitness mimic a club environment—strobe lights, music curated by a live DJ, high-energy-lose-yourself moves—except instead of wearing stilettos and drinking champagne, you’re sporting sneaks and guzzling water, all the while getting a serious high-intensity interval-training workout. Meanwhile at Cyc, where light patterns change with every song, one of the guiding principles is that “socializing shouldn’t be just for restaurants and bars,” founder Stephen Nitkin says. So Cyc’s booking platform lets riders see which classes their friends are signed up for and choose bikes next to them. Flywheel Sports, with 30 locations throughout the country, also has a social booking app. Crunch gyms offer karaoke and music videos to bring the party vibe to their indoor-cycling sessions.

Of course, it’s good business for health clubs to ensure that people have fun while they sweat, but the workout-as-happy-hour trend is actually in response to member demand, says Natalie Bushaw, a spokeswoman for Life Time Fitness who has seen the trend spread across the chain’s 113 clubs. People who sweat to be social love it because they’ve accomplished two things—working out and catching up—all without having to get decked out and spending a lot of money on cocktails, she says.

When too many classes were starting late because so many students were busy chattering, Penny Love Hoff, the head of group fitness for Life Time Athletic in Harrison, New York, changed her 60-minute after-work barre class to 45 minutes at the barre and 15 minutes at the bar (yes, the gym serves organic beer and wine). Class now starts on time—and no one leaves early. We’ll drink to that.

Where to find fun and fitness across the country.

In-Store Samplers: Hip labels like Athleta and Lululemon bring in top pros to let you and your pals try trendy routines—free. Go toathleta.com, then click on a location near you to see its class calendar. Ditto at lululemon.com. Meanwhile, New Balance stores hosts Girls Night Out events, during which a group run leads into a DJ’d cocktail hour. Check nbgirlsnightout.com for upcoming events and tools to organize your own meet-up runs.

Dance, Dance, Revolution: It doesn’t matter if you can’t make it to insidery Sweaty Sundays classes at the Sweat Spot in Los Angeles. You can get your fill of grooving with the DJ’d dance party workout Daybreaker—happening in cities such as Atlanta, Chicago, San Francisco and Seattle—or at Pound class, a cardio-strength jam in 600 gyms that has you wield drumsticks to a driving beat. Many clubs host Pound and Pour mixer sessions.

Pop-Up Workouts: Sites like joinvint.com, serving San Francisco (and expanding soon) are busting out group fitness classes beyond the gym by arranging for instructors to lead workouts just about anywhere. KiwiSweat also just launched an app (free, iOS) that allows trainers to create classes on the fly, which users can book.

From Solo to Social

No workout buddy? Plug in to these virtual play groups.

Strava: Serious cyclists and runners use Strava, which works with many GPS devices. Status updates are limited to your workout stats, and you compete with other members via “Segments,” which are user-defined sections of running and cycling trails. Pass through a Segment and the network automatically ranks you on the leaderboard. (strava.com)

Runtastic: Starting with the latest 5.0 version, the Runtastic app’s social features—which include “live tracking,” basically a cyber cheering section—are now free because “we wanted to boost the motivation of our users,” spokeswoman Susana Lopez says. (runtastic.com)

Fitocracy: Like a sweat-fueled mash-up of Facebook and Foursquare, Fitocracy gives you a profile, a feed, friending abilities and updates. You score points by tracking your workouts, then earn badges for milestones. You can also join chat groups with anyone in the network and get on “teams” led by trainers who will guide you toward a goal. (fitocracy.com)

Get the thrill of competition without having to elbow your way to the starting line or fight for floor space.

The Gunnar Challenge: Last year celeb trainer Gunnar Peterson introduced virtual eight-week challenges, in which you get daily workouts (the same routines as the A-listers), a personalized web page, and the ability to connect and compete with your fellow challengers. The latest challenge kicks off on January 1, and $89 gets you in. Of creating a fitness community, he says: “The higher level of accountability increases adherence to the program, which improves results.” (gunnarchallenge.com)

Peloton: Not everyone can get to a studio cycling class, so Spinning bike maker Peloton’s new app lets you stream classes live or on demand on your iPad. The app comes with 20 free live-ride credits and five on-demand rides. If you want to continue, you’ll need to pay a monthly subscription or by the class. (pelotoncycle.com)