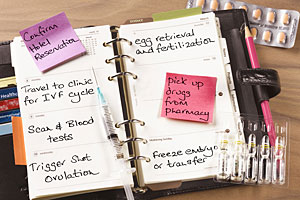 I just wanted one more baby

“I conceived easily when I was 30 and again at age 32. When I turned 36, I wanted one more child. I quickly got pregnant but miscarried at 12 weeks. After seeing a fertility specialist, I conceived with an IUI, but that pregnancy also ended in miscarriage. I felt strange after that: I kept having hot flashes, and I wasn’t getting my period. Six months after the miscarriage, I got shocking news: I was in premature ovarian failure. Once I got my wits about me, I decided to use an egg donor. My husband required a little more convincing. We had two beautiful children already, he felt—why did we need to keep trying to get more? But I was determined. I knew how awesome it was to be a mom, and I wasn’t going to give up the opportunity. The process of finding a donor was strange: I ended up picking someone who didn’t really look like me but was close to her family and seemed like someone I could relate to. I thought about her a lot during the pregnancy. But when my son was born, he just felt like my own biological baby. He is now 7 months old, and every time I look at him, I feel so much gratitude.”

I thought it was too late for me

“I am still in shock that I am 41 and almost nine months pregnant! Ive been married for 10 years but have always been very blasé about having children. My husband is six years younger than me, and we have very full lives. Im an avid traveler, teacher, freelance writer, book author and recreational archeologist, so a baby was just never a priority in my life. I went off of the pill when I was 39 in an effort to get pregnant, but when I didnt after six months, I just assumed it wasnt going to happen.

“Then, a year later, I experienced the weirdest period Id ever had: It wasnt really bleeding, just on-and-off spotting. I took a pregnancy test to be safe, and when the first came back positive I was in such disbelief that I took another one. Even now, I feel guilty that my initial reaction wasnt ecstasy but rather ‘Oh, s—t.’ At age 41, its difficult to go through such a major change, and it took a while to wrap my head around how the baby was going to fit into our lives. To be honest, those first few months, I figured—given my age—that the baby wouldnt even make it to term. But by the end of my first trimester (and after weeks of really bad morning sickness), it was clear to me that the baby was here to stay. The last few weeks have been tough, mainly because I am on my feet teaching all day, but I am now excited about my pregnancy. Its a game changer all right, but in a good way.”

I’m OK with not having a child

“I tried to get pregnant for five long, excruciating years between the ages of 34 and 39. I felt like I had been run through the infertility mill and suffered countless misdiagnoses, so when I finally learned that I had poor ovarian reserve and would never be able to conceive, even via IVF, unless I used donor eggs, there was a sense of relief. The whole process had just left me emotionally strung out. I was distraught and frustrated—how could this happen to me?—but at least I had a feeling of peace. I knew what the problem was, and that there was nothing I could do to ‘fix it.

“I didnt want to go the donor egg route—I didnt want to spend the time, money and energy on more fertility specialists. We contemplated adoption, but after coming to terms with my infertility, I had a surprising realization: I was happy with my life, and I didnt necessarily want to change it. My husband is quite a bit older than me, and his kids are grown. We both enjoy being able to travel and otherwise live our lives the way we want without having to be accountable to anyone. I no longer choke up when someone assumes that just because Im a certain age I have kids, or get defensive when Im asked why Im childless. Im comfortable with my life path the way it is.”

I put my eggs in storage

“I froze my eggs three years ago as a present to myself for my 35th birthday. Why? I was unwilling to make decisions in life based on pressure from my biological clock. I didnt want to force a relationship because I was worried about how old I was. Id rather find the right marriage and relationship than settle because I felt pressure to start a family. At age 35, I felt that I was at the top of my game workwise—Id just opened three restaurants in Colorado—but I didnt have a viable relationship in sight. This way, I knew Id have some insurance for later in life. If I cant get pregnant on my own, I know I have 15 frozen eggs in storage. Even if they dont pan out, at least Ill know I have exhausted all options.

“The process turned out not to be that big of a deal. The hardest part is psyching yourself up to give yourself a daily injection—but the reality is, its less painful than popping a zit. The biggest issue was the inconvenience: I had to do it every 12 hours for two weeks, so Id have to bring it with me if, say, I was out with girlfriends for dinner. I also felt crampy and bloated during that time, like I was having a really heavy period. I had to ditch my skinny jeans for yoga pants, which, in the greater scheme of things, is nothing. The actual egg retrieval took 45 minutes. I had to go under a mild sedative, and when I woke up I felt a little woozy and needed a friend to drive me home, but I was back at work the next day.

“When I did it, I didnt have anyone else to guide me through the process—I was the first person I knew to do it. Now I have so many friends who have opted to freeze their eggs that Ive lost count. Over the last year, Ive undergone some major life changes: I moved to the East Coast and started a new job. Its overwhelming at times to have hit the reset button at age 38. Right now Im focusing hard on work and finding a life partner. But whether I find him in one year or 10, its good to know that I have some insurance waiting for me back in a freezer in Colorado.”

Are you trying to get pregnant? Would you be willing to help researchers examine whether lifestyle factors like diet, exercise and medication affect fertility? Go to sites.bu.edu/presto to find out more about the Boston University Pregnancy Study Online (PRESTO) to see how you can help.

As told to Hallie Levine Sklar