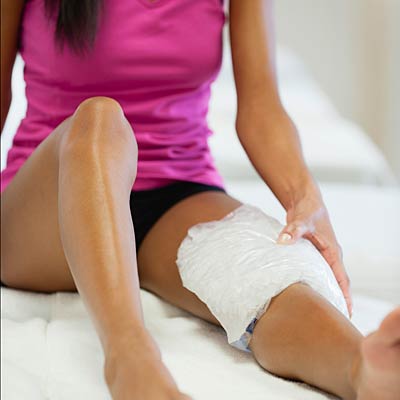 It starts with tightness on the outside of your knee and sometimes around your hip. Over the miles, that tightness turns into pain—enough pain to stop you in your tracks and keep you from training. For runners, the culprit is often an overtraining injury called Iliotibial Band Syndrome or ITBS.

“IT band issues are very common in runners—I’ve even gone a few rounds with it myself in the past,” says Dawn Dolobowsky, a physical therapist and coach based in Kirkland, Washington. “It’s frustrating because it tends to be a chronic issue, which means that is comes on slowly and takes a long time to fully recover.”

The iliotibial band is a thick piece of fibrous connective tissue that runs from the outside of the pelvis over the hip and down to the knee, where it inserts. It plays an important role in stabilizing your knee when you’re on the run; however, when it becomes too tight, it can hurt as it slides over the outside of the knee. Think of it like a rubber band that becomes less adaptable to movement as it is tightened.

ITBS-associated pain tends to materialize at the end of runs, worsening with increased mileage. “You’ll stop and notice a slight burning on the outside of the knee, and it gradually worsens as you cool down,” explains physical therapist Steve Gonser, founder of RunSmart Online. “Most runners suffering from ITBS can feel twinges of pain when they straighten and bend their knees.”

While biomechanists haven’t yet arrived at a firm conclusion on the cause of ITBS, research suggests that it may have something to do with knee and hip kinematics. Put simply, it seems that both gait and physiology contribute to the problem.

Dolobowsky explains that muscle weaknesses and imbalances are linked to these types of issues, saying, “The most common imbalance is weak glutes, specifically a weak gluteus medius—the muscle that stabilizes the hips laterally during running.”

IT Band Syndrome Treatment and Prevention

A literature review of the various treatment options published last year in the Journal of Sports Medicine suggests that resting 2 to 6 weeks, stretching, and cutting back on running provided relief from ITBS for 44 percent of participants in these studies. This course of treatment allowed the runners to return to activity within eight weeks of the injury. Utilizing these same measures, 91.7 percent of the participants were feeling better by six months, and were then able to resume training.

Gonser emphasizes the importance of seeking out a trained physical therapist when you run into an IT band ailment. “This isn’t an injury you can run through,” he explains. “A skilled physical therapist can help you identify any biomechanical errors while also adjusting your training plan.”

More: How to Aggressively Treat IT Band Syndrome

For the most acute cases, rest is usually the best medicine. As the injury improves, you can try to bike or use the elliptical until you’re able to return to running. While it may derail your training, the longer you put off the healing process, the worse the injury is likely to get.

“Soft tissue work, like foam rolling and Graston, can help provide some relief, and may even eliminate symptoms,” says Dolobowsky. These measures are often effective when you are first experiencing pain, allowing you to tackle the issue before it worsens. Not only can soft tissue massage and related treatments help work out any adhesions that have developed along the IT band, but it can also assist in stretching the tissue and making it more pliable.

Even still, ITBS is likely to continue rearing its ugly head until you address the root cause of the injury. If you are a runner who has experienced these issues in the past, it is worth having a physical therapist assess your gait and lower extremity strength to identify potential weak spots that may be causing the problem in the first place.

“A physical therapist can diagnose the muscle imbalances that are putting extra strain on the IT band, and develop a treatment program to resolve your specific issues,” says Dolobowsky.

In addition to regularly using a foam roller to stretch the IT band, runners should also start a strength routine that includes exercises such as single-leg balance moves, side leg lifts and clamshells. The purpose of such exercises is to strengthen the major running muscles and the smaller stabilizing muscles that help support the running motion.

While ITBS can be persistent once it takes hold, strength and flexibility work done 2 to 3 times a week can make all the difference. If you are beginning to feel a bit of tightness near the outside of your knee or a tinge of pain around your hip, it’s well worth the few minutes it takes to do these exercises. Your body will thank you down the road.